We are an active and versatile hub of museum work and cultural experiences, a seminar center, and a place for both private parties and corporate events. Vanhalinna (eng. Old Castle) is a beautiful collection of venues in the Aura river valley, by the Linnavuori hill. The most noticeable landmarks of the Vanhalinna estate are the ancient Linnavuori (eng. Castle Mountain) hill, an Iron Age gravesite, the Aura river valley with its traditional Finnish farm landscape, and the manor house estate and all its buildings. The estate gained its current appearance in the early 1900s.

Vanhalinna is a popular travel destination and a memorable venue for all kinds of events, with over 30 000 yearly visitors. Vanhalinna is located only a slightly over 10 minute drive away from the Turku city centre. 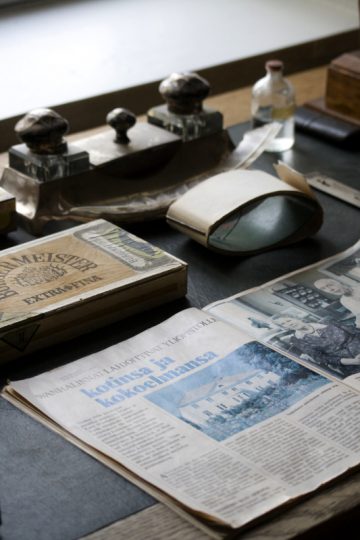 From a hillfort to a center of culture

Vanhalinna is the most researched ancient hillfort site in Finland and has provided the richest discoveries as well. Artefacts from as far back as the stone age have been found from the hill. After Turku Castle was completed closer to the mouth of river Aura, when the prehistoric hillfort still stood, it began to gradually lose some of its significance.

When Finland came under Swedish rule Vanhalinna was made into a farm estate under the bishop’s jurisdiction and after that a nobility owned fiefdom. In the 18th and 19th centuries the Vanhalinna estate was under the ownership of the Hjelt family, who also founded a textile factory in Littoinen. The appreciation of agriculture and Finnish peasant culture that the last family to own the estate upheld originated from these days.

Mauno Wanhalinna inherited the ownership of the estate in the year 1930, right when the neoclassical manor house had been completed. After their marriage in 1944 Mauno and Ester Wanhalinna began to turn their home into a living museum, the results of which can still be seen today in the multifaceted selection of exhibits in this culture centre.

The Wanhalinnas wanted to secure their lives’ work by gifting their estate to the then-private University of Turku in the year 1956. The University of Turku was deprivatized in the year 1974 and Vanhalinna remained, along with all the other donated property, in the ownership of the Turku University Foundation. The foundation has done a remarkable deed of cultural preservation by repairing the entire estates building stock from the mid 1990s onwards.

The further developments of Vanhalinna are done according to routinely formed five-year-plans.

Ancient monuments
Museum collections and our research
Organization
Our collaborators